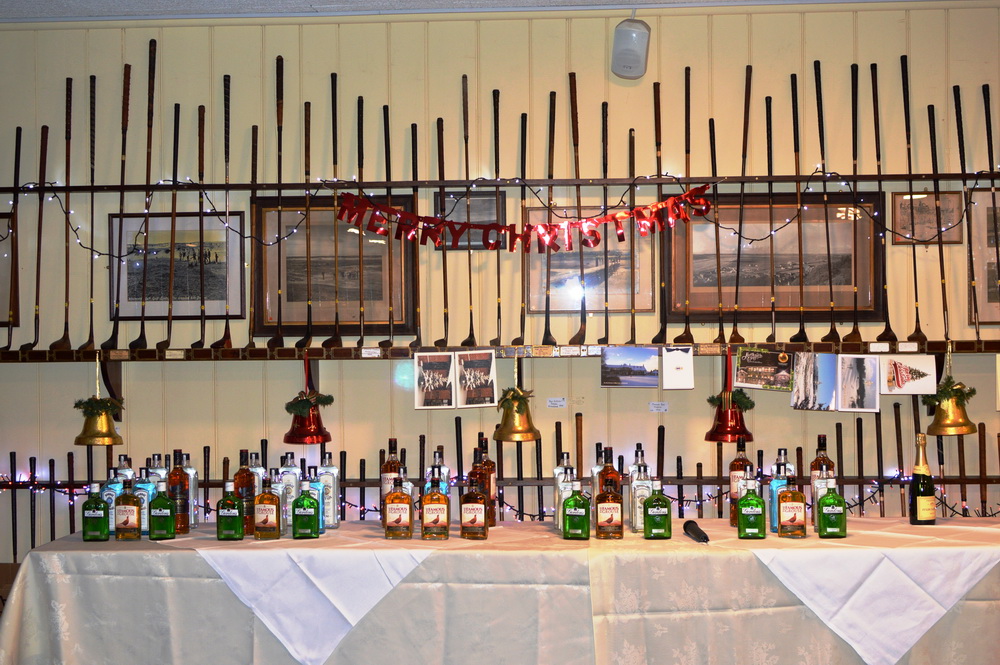 The 65 good men who attended the annual Christmas gathering enjoyed some good food good company a little libation with some light entertainment all combining to make a very pleasant social occasion.

In the absence of the Captain recovering from painful dental surgery involving inserting stitches in his mouth which frankly did not evoke the sympathy it merited coupled with the fact that the Vice Captain had fled the country meant that Andy Hood next years Vice Captain was called upon to present the prizes.

Later in the evening the enforced absence of the captain meant the David Fishleigh last years Captain took over the responsibility of relaying the Captain’s annual address. David an accomplished raconteur bon-viveur and rake about town gave an entertaining account of last years proceedings spiced with his own brand of topical humour. All delivered with such aplomb that no one seemed to notice the Captain was elsewhere!

Richard Tuckett a long serving member of the section and invited guest who has had to retire from golf due to failing eyesight was presented with an engraved whisky glass by the stand-in Captain to commemorate his contribution to the section over many years. Richard takes with him our warmest good wishes for his future well-being.

The gathering was also an opportunity to mark the end of the era of Jeremy Wright as vet’s Secretary he also was awarded a whisky glass as a small token of the gratitude the section owed him in recognition of his dedication over and above the call of duty over the past four years. Everyone in the room heartily wished Jeremy a happy retirement.

Ken Danson rounded off the evening with an entertaining speech (well I thought so anyway) and we all live to fight another year.

01 Phil Hall winner of the Commander Wright trophy.
02 Richard Tuckett receiving the congratulations of the acting Captain for his contribution to the section over many years.
03 Dai Lewis on behalf of himself and David Miller being presented with the Cresswell Cup for the Greensomes Knock-out trophy.
04 Brian Russell on behalf of himself and Geoff Giddy being presented with the Slatter Cup for the pairs Knock-out Competition.
05 Alex Craner on behalf of himself and Mike Powe being presented with the 150th Cup our Members and guest day trophy.
06 Mike Stacey and John Eland in the team winning the January Whisky Compettion.
07 Alex Craner and dai lewis in the team coming second in the January Whisky.
09 A fine selection of alcoholic spoils on display purely for medicinal purposes of course.
10 Clifford Brown on behalf of himself and Peter heath accepting the Foursomes Salver Greensomes Trophy.
11 David Pinney the winner of the Keith Braund trophy.
12 Pat Mcguckin the winner of the Members Cup
13 Richard Stubbs winner of the Nott’s Pot trophy.
14 John Ollier the winner of the Monty Heywood trophy
15 Mike Scambler seemingly quite pleased with his box of Chocolates in the Christmas Competition.
16 Clifford Brown the Div 1 winner in the Champagne and Chocolates Competition.
17 Dai lewis and Maurice Heather in the winning team of the November Whisky Competition.
18 Bob Morgan and Michael Blight in the team that were runners -up in the November Whisky Competition
21 Alex Craner and Ken Danson in the team coming second in the January Whisky Competition.
22 Ron Juniper Clifford Brown and Richard Stubbs in the team coming third in the October Whisky Competition.
23 David Birch Ken Danson and Maurice Clifton winners of the March Whisky competition.
24 Les Kingsbury and David Pinney runners- up in the March Whisky Competiton
25 John Harkness Mike Lockyer and Jim Knott third place in the March Whisky.
26 David Fishleigh Maurice Heather and Robert McDermott winners of the February Whisky.

GOATS - Golf On A Thursday!

The Virtual Vets are keeping in touch