NDL1 - BATTLING STRONG WINDS, FAST GREENS AND THE SHANKS FOR P3 & A TWO! 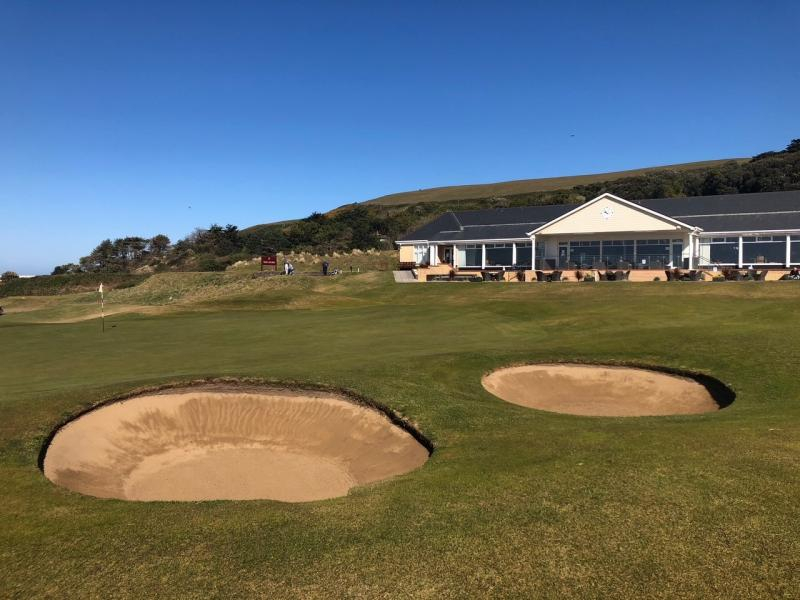 After the challenging scoring conditions at RND in the David Lloyd Salver Medal on Saturday the team headed North across the bay to a fantastically presented East course at Saunton on Sunday 25th April for the opening round of this season’s North Devon League.

The strong easterly wind, 16mph but gusting what felt like 40, made keeping the ball in play off the tee and avoiding any treacherous downwind putts on a hard and fast course with some tricky pin positions very challenging.

Chris Sturman had a tough opening six holes but finished strong for 27 points followed by this year’s team captain Mark Luscombe who, disappointingly, finished bogey - bogey for 30. Next in was Selwyn Fisher, a late replacement for the injured Chris Hampton, with a total that, thankfully, did not have to count for the team total. Immediately dispatched to the top end of the car park, asked to remove his team top and bag tag he was asked to think about what he’d done! Matt Bright followed with a gritty 20, which included an excellent birdie 2 on the short 5th, one of only two scored by the whole field on the day! Next in was Neil Armstrong who came good with a strong two putt par on the last for our second score of 30. He had kept our hopes of a strong result alive! Then, a weary figure lumbered into view. Short on balls and heading for the bunker short left of the last, but mostly just relieved not to have hit another shanked approach while in full view of the clubhouse, it was our anchor man Shaun Loze. He proceeded to splash out expertly before missing his par putt to finish with 22. “Eight blobs I’ve had” he announced to the assembled crowd before asking “why’s Selwyn over there on his own?” and talking the team through a screenplay idea titled ‘The Shaunshank Redemption’ he’d been working on for much of his round.

The five best scores to count format meant a total of 129 points, which was good enough to finish third behind the host team, who scored a very strong 145 including the top score of 35, and the team from Portmore with 131. And so, our campaign back in the first division begins with us precariously positioned mid table.

Next up on the fixture list is Morthoe & Woolacombe, where a changed team lineup will look to pressure the top of the table and where the Lions Artisans player who finished the first fixture last with only 14 points will be thanked for sparing the blushes of our ‘non counting’ team member!

A weekend of ups, downs and a little controversy

Tweets by @RNDGolfclub
See All Reviews Write a Review