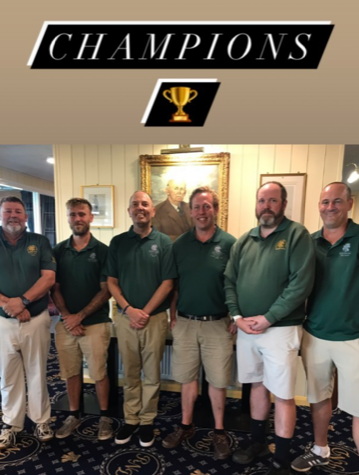 On sunday in perfect golfing conditions the final league fixture was played at RNDGC with neither the league winners nor relegation sorted so all to play for.

First up for RNDGC was Paul Wilson who started poorly and only had 3 points after 3 but a 2 on the 5th kick started his round and he finished with 38 points.

Second up was Neil Armstrong still reeling after his matchplay loss the night before playing with Andy Norman from Portmore, Portmore were favourites to win the the league so we knew the experienced Andy would pull Neil through for an excellent 37 points.

Next up was Shaun Loze playing with big hitting 1 handicapper  Sam Ashton from Portmore both played solid golf with Shaun scoring 39 points playing very steady golf which kicked on after another 2 on the 5th.

Fourth group was Andy James who has been very reliable all season but he had a day to forget only scoring 30 points so we needed good steady points from the last 2 players and 5th off was Kevin Rowe who played some very steady golf for a well earnt 37 points.

Last off was the experienced Paul Drew playing big hitting but wayward Jeremy Johnson from Portmore, Paul was another who started slowly with 5 points after 4 holes but duly delivered with 34 points on the next 14 to finish with 39 points.

Excellent team effort with Royal North Devon winning the final league fixture to finish 3rd in the league just missing out on a runners up spot to Saunton.

A big well done to Portmore who won the league.