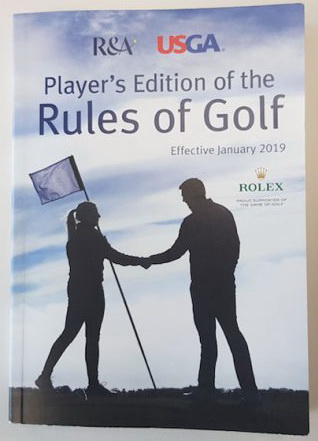 The following are the main changes to the Rules of Golf taking effect January 1, 2019 that are expected to have the most impact on the game and to be of most interest to golfers.

No penalty for accidentally moving your ball during search.

No Penalty for Moving Ball on the Putting Green

No penalty for accidentally moving your ball or ball-marker on the putting green.

Standard for Deciding Why a Ball Moved

New standard to determine if you caused your ball to move.

Replacing Ball When Original Spot is Not Known

When the original location of your ball is not known, replace it on its estimated spot.

No penalty if your ball in motion is accidentally deflected by you, your equipment, or your caddie.

Your relief area for dropping a ball will be a fixed size of either one or two club-lengths using the longest club in your bag, other than your putter.

New Procedure for Dropping a Ball

Your ball must be let go from knee height and fall through the air without touching any part of your body or equipment.

Where a Dropped Ball Must Come to Rest

Your ball must come to rest in the relief area where it was dropped, or else it must be redropped.

Fixed Distances to be Used for Measuring

A fixed distance of the longest club in your bag, other than your putter, will be used for measuring.

Time For Search Before Ball is Lost

Your ball is lost if not found in three minutes (rather than the current 5 minutes).

You may always substitute a ball when taking relief.

Relief For an Embedded Ball

Relief allowed without penalty for an embedded ball anywhere (except in sand) in the “general area” (a new term for “through the green”).

In taking lateral relief, you will drop within two club-lengths of where your ball entered the penalty area. The size of a club-length will always be measured using the longest club in your bag, other than your putter.

One of your options for relief from either a red or yellow penalty area will be called back-on-the-line relief.

Areas of the Course

When to Replace a Ball That Moves on the Putting Green

After your ball has been lifted and replaced, you would always replace your ball on its original spot, even if it was blown by the wind or moved for no clear reason.

Repairing Damage on the Putting Green

Repair of almost any damage allowed on the putting green (including spike marks and animal damage).

Touching Line of Play on a Putting Green

No penalty for touching your line of play on the putting green so long as doing so does not improve the conditions for your stroke.

No penalty if your ball played from the putting green (or anywhere else) hits the unattended flagstick in the hole.

Areas the Committee May Mark as Penalty Areas

Areas of desert, jungle, lava rock, etc. (in addition to areas of water) may now be marked as red or yellow “penalty areas.”

Touching Loose Impediments or Ground in a Penalty Area

No penalty for moving loose impediments, touching the ground, or grounding your club in a penalty area.

Expanded Use of Red-Marked Penalty Areas

Committees are given the discretion to mark any penalty area as red so that lateral relief is always allowed.

Elimination of Opposite Side Relief for Red Penalty Areas

Relief from a red penalty area no longer allowed on the opposite side from where the ball last entered the penalty area.

Relaxed Rules relating to loose impediments and touching the ground in a bunker.

Relief allowed outside a bunker for an unplayable ball for two penalty strokes.

Use of Clubs Damaged During Round

A club damaged during a round can continue to be used, even if you damaged it in anger.

Adding Clubs to Replace a Club Damaged During Round

You will not be allowed to replace a damaged club during a round if you were responsible for the damage.

The use of DMDs will be allowed unless a Local Rule has been adopted prohibiting their use.

Caddie Standing Behind a Player to Help Line the Player Up

A caddie is not allowed to stand on a line behind you while you are taking your stance and until your stroke is made.

Your caddie may lift and replace your ball on the putting green without your specific authorization to do so.

Ball Accidentally Struck More Than Once During a Stroke

If your club accidentally strikes your ball more than once during a stroke, there will be no penalty and your ball will be played as it lies.

When to Play During a Round

It is recommended that you play “ready golf” and make each stroke in no more than 40 seconds.

A new “Maximum Score” form of stroke play is recognized, where your score for a hole is capped at a max score.